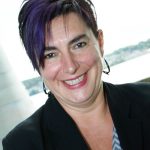 The Scottish Council for Voluntary Organisations’ (SCVO) Board of Trustees is delighted to announce that Anna Fowlie has been appointed as the organisation’s new Chief Executive Officer, and will take up the post in April 2018.

Anna joins Scotland’s national third sector body from the Scottish Social Services Council (SSSC) where she has been Chief Executive since 2009. During that time she led significant organisational change which saw the organisation become more responsive and engaging, driving high standards of care and public assurance. She has been a champion for care experienced children and young people, driving forward a new approach to corporate parenting in collaboration with partners in local government and the third sector.

Anna’s appointment follows the retirement of predecessor Martin Sime, who left the organisation in December 2017 after more than twenty five years at the helm. Lucy McTernan has been acting Chief Executive Officer since Martin’s retirement, and will continue in that role until April.

The appointment follows an external recruitment campaign led by Livingston James, with interviews being conducted by a panel including Andrew Burns, SCVO Convener; Theresa Shearer, CEO Enable and SCVO Trustee and Chair of the recruitment panel; and Gordon MacRae, CEO Humanist Society Scotland and SCVO Trustee.

Responding to her appointment Anna Fowlie said: “I am really delighted to have been appointed as Chief Executive of SCVO. Scotland’s third sector has never had a more important role to play in the future of our communities and the direction of our country.

“I am eager to get down to work and experience for myself the amazing things achieved by SCVO’s staff team across each of our sites. An early priority for me will be to listen to SCVO members to ensure that their voice resonates through all that we do and say. I am grateful to trustees for their confidence in me and look forward to the challenges ahead.”

SCVO Convener Andrew Burns said: “This is the first time in twenty five years that the trustees have had to recruit a new Chief Executive and we were determined to get it right. From amongst the wealth of talent that came forward through our open recruitment process, Anna distinguished herself as a leader with the vision and the track record to bring about transformational change for SCVO and Scotland’s third sector. I now look forward to working together with Anna as we embark on this new and exciting era for SCVO.”

Sharpening your skills during the Covid crisis